One of the downsides of a new version of vSphere is that customers have to wait until ALL the integrations and products that interact with vSphere itself are compatible with new versions as they are released. This generally takes time unfortunately. However, one of the roadblocks to upgrading to vSphere 6.7 has been removed with the introduction of NSX 6.4.1 which now officially supports vSphere 6.7!  However, the vSphere 6.7 support is only one of the many new features with NSX 6.4.1.  One of the major features is the addition of much more functionality inside the HTML5 interface for NSX 6.4.1.  Let’s take a look at VMware NSX 6.4.1 Released New Features With vSphere 6.7 Support.

So this is another really great release from the VMware NSX team.  It includes many new features that have been extended from the NSX 6.4 release such as the context aware firewall and identity firewall features. 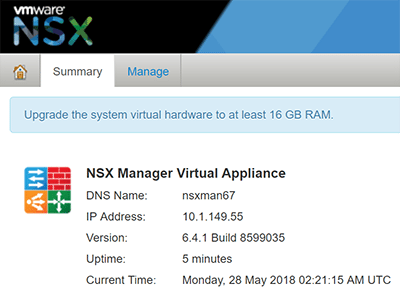 Perhaps some of the more exciting features even are the enhancements to the HTML5 interface, extending what can be done via the brand new ultra fast HTML5 UI.  This includes the following:

VMware is certainly making a strong push to have the HTML5 client fully functional by the Fall of 2018 and they are giving everyone confidence that this will be accomplished with the blistering pace they are adding functionality to both vSphere core products and the ancillary products that extend the core vSphere feature set.  There is still work to be done.  Below is the table found on the Functionality Updates for VMware NSX for vSphere that shows functionality that still not supported as of yet with the HTML5 client.

The other big feature with VMware NSX 6.4.1 is of course the compatibility with vSphere 6.7.  Again, many were perhaps holding out on upgrading to vSphere 6.7 because of VMware NSX.  This can now be removed as a roadblock and can allow organizations to get the latest functionality across the board when upgrading both vSphere and NSX.  We are still waiting however on supportability of vSphere 6.7 from the major backup vendors, but hopefully these announcements will be made soon!

It certainly is cool to see the NSX functionality being brought into the new HTML5 interface with the speed and efficiency of operations being greatly improved with the performance of the new interface.  It is great to be able to install and configure NSX 6.4.1 in vSphere 6.7 using the new workflows of HTML5.

General compatibility with VMware NSX 6.4.1 is as follows.  Note there is no compatibility documented as of yet for vSphere 6.5 Update 2.  Additionally a point to note is organizations need to be upgrading from vSphere 5.5 as soon as possible.

The news of VMware NSX 6.4.1 Released New Features With vSphere 6.7 Support was certainly music to the ears of many vSphere admins last week.  It is awesome to see the progress being made with migrating to the HTML5 interface and how VMware has revisited workflows and such with the interface and is not simply just porting things over.  The support for vSphere 6.7 has removed a major roadblock for organizations who are running NSX not being able to upgrade until that compatibility was released, and now it has been.  Look for more NSX 6.4.1 coverage here with a series of articles to come.  Stay tuned!